Papua Mining (LON: PML), the gold and copper exploration company, is pleased to inform shareholders that it has,  through its 100%-owned subsidiary BGM Investments Pty Ltd, recently applied for another strategic and highly-prospective exploration licence (EPM26745) which immediately surrounds the Mt Leyshon Mining Lease. The award of the licence is subject to formal grant by the Queensland Department of Resources and Mines.

An image showing the new application and its proximity to Mt Leyshon Mining Lease is available at the link below. 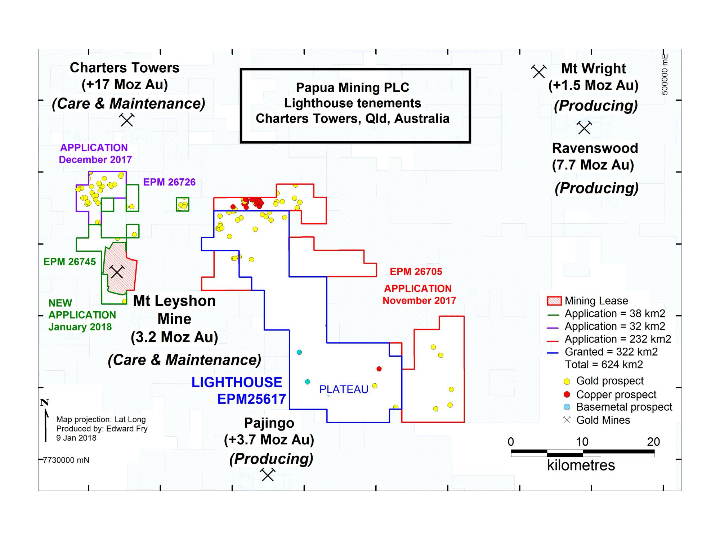 Gold was first discovered at Mt Leyshon in 1887 when the Mt Leyshon Gold Mining Company was listed on the London Stock Exchange with capital of £150,000. It was not until 1920, when the Prince of Wales gold nugget, weighing 143 ozs was discovered west of Mt Leyshon, that the goldfield started to attract more significant exploration effort.

Modern open cut gold production commenced at Mt Leyshon in 1987 and continued uninterrupted for 15 years until 2002. During the life of the operating mine, the average open pit gold grade was 1.4g/t Au.

The open cut mining operations exploited an orebody which is 400m long at surface and through drilling, gold mineralisation is known to continue down to at least 650m below surface. The Plateau Prospect within Papua’s Lighthouse tenement is similarly 400m long and gold has been intersected in drilling at 550m depth so far.Chief Executive Officer of Papua Mining, David Price commented:

“Our strategy of acquiring highly prospective, low-entry-cost opportunities in the Charters Towers region is an on-going process. The recent application for New Leyshon provides opportunity for Papua which is immediately surrounding a Mining Lease which has produced multi-million ounces of gold and silver. Within the adjoining Mt Leyshon Mining Lease itself, gold has been intersected in drilling down to 650m below surface, yet only open cut mining has taken place. Papua’s management believes this to be a large mineralising system and opportunity may exist for repetitions or extensions to this mineralisation outside of the Mining Lease. Papua continues to keep a close eye on long-term growth opportunities.”

In the meantime, Papua is awaiting final results of its reverse circulation drilling program completed in December 2017 at the Plateau Prospect within the Lighthouse tenement.

For further information on the Company please visit www.rockfireresources.com or contact the following:

This information is provided by RNS

The company news service from the London Stock Exchange