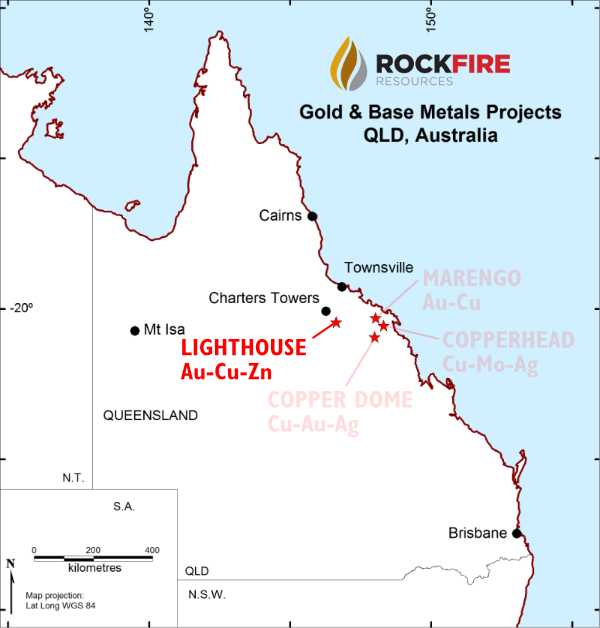 The Lighthouse tenement (EPM 25617) is located approximately 50km southeast from the gold mining centre of Charters Towers in Queensland Australia. Charters Towers has produced more than 6 million ounces of gold.

The tenement has been explored previously by large, multinational corporations including Esso, Battle Mountain, Aberfoyle, Newcrest, CRA and Penarroya. More than 4,500 m have been drilled historically within the Lighthouse tenement.

This drilling has confirmed that high grades are achievable at each prospect and these intersections demonstrate the potential of the Lighthouse Project to host significant, near-surface gold deposits. 53,000 ounces of gold have been identified within the top 100 m from surface at Plateau, which is being considered for scoping open cut mining potential.

Rockfire aims to further explore the Plateau Prospect, as well as following up numerous prospects elsewhere within the tenement. Additional drilling at Plateau could see this project become a large-scale gold deposit. 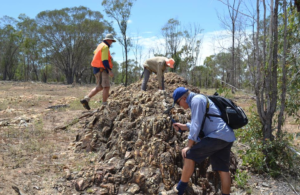 Penarroya collected 193 soil samples and 120 stream samples in 1979 around the immediate area of Plateau. At the conclusion of the 1979 field season, Penarroya geologists concluded that “…assuming that ore grades of Cu, Pb, Zn exist within the fault zone, a speculative two million tonne deposit could exist.” Eeson B et al., (1980).

In 1980, Penarroya undertook the first round of drilling at Plateau. Four (4) RC holes for 591m were drilled. Hole 1 was abandoned due to caving, Hole 2 intersected 166m of pyrite, Hole 3 intersected 54m of pyrite and Hole 4 intersected a 9m wide zone of pyrite. No gold was analysed.

CRA Exploration Pty Ltd farmed into the exploration licence with City and undertook regional and semi-regional geophysics, geological mapping, stream sediment BLEG sampling, rock sampling, ground magnetics and radiometrics. From 1992 through to 2008, exploration field work by various companies including Aberfoyle, Liontown, Plutonic and Newcrest focussed on other regional prospects and very little work was undertaken within the Lighthouse tenement itself. 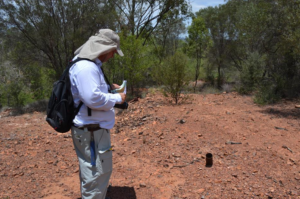 Newcrest undertook drilling at Plateau in 2007 when it drilled a single 853.7 m deep drill hole (PLDD06001). This hole was designed to test the rhyolite plug and mineralization at depth beneath the southern edge of the rhyolite. This hole was an outstanding success and intersected the projected mineralised lode at the edge of the felsic plug more than 500m vertically below the drilling closer to the surface. The drill hole intersected 2m @ 1.0g/t Au and +30g/t Ag, confirming that the structure and associated gold and silver mineralisation continues to at least 500m vertical below surface. This offers the possibility for a large, mineralised system extending to this depth and beyond. An assay of 1m @ 102g/t Ag was also intersected mid-way through the hole at 411m deep. Seven spatially separate one-metre intersections occur throughout the hole which assay above 20g/t Ag.

With consistently wide intervals of multi-element mineralisation being encountered at Plateau, the Company’s technical team is observing similarities to the operating Mt Wright Gold Mine (+1.5Moz gold), located 50km northeast of Plateau and believes another breccia complex similar to Mt Wright may exist at Plateau. Zinc/Lead/Silver ratios at Plateau are similar to the upper levels of Mt Wright (surface down to 160m deep), indicating that the best developed gold mineralisation may potentially be deeper than the current level of drilling. 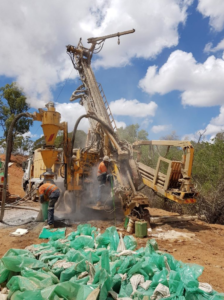 Aberfoyle Exploration summarised the potential for Plateau to host a high-grade gold deposit and provided compelling evidence that Plateau has similarities to Kidston and Mt Leyshon gold deposits;

• Identical Permo-Carboniferous felsic (rhyolitic) intrusives
• Similar lead isotopes, base metal association and alteration to Mt Leyshon and Mt Wright
• Geometry of the plug is unknown but surrounded by hydrothermal breccia and veining
• Surrounding areas covered by laterite have only received wide-spaced drilling
• Plateau has a geophysical signature of high Potassium (K) and magnetic low like Mt Leyshon
• Plateau has returned potential “ore grade” intercepts from a district that has produced +10M ounces gold

Drilling at Plateau has not been systematic. Sixty-two (62) RC drill holes, four (4) diamond tails, and four (4) full diamond drill holes have been drilled over a strike length of approximately 800m. Plateau is open at depth, along strike and hosts multiple, un-drill tested, sub-parallel, fault zones which warrant drilling. 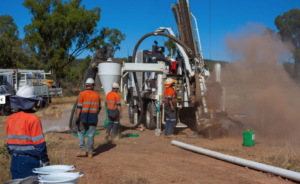 Battle Mountain Ltd also drilled a second section of the strike, but this time in the western part of the mapped outcropping quartz vein, some 2.5km to the west of the eastern lode. The section tested was similarly 400m in length and RC drilling returned very poor results including 2m @ 0.36g/t Au, 6m @ 0.1g/t Au, 1m @ 0.6g/t Au and a single stand-out intersection of 2m @ 4.65g/t Au. 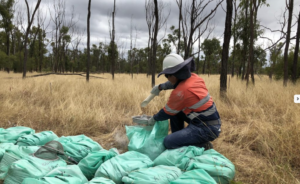 Geological and structural mapping by Rockfire in 2018, along with high-resolution photogrammetry and ground magnetics led the Rockfire geologists to believe the holes drilled by Battle Mountain had been drilled too far to the south and had missed the gold mineralisation. After repositioning the drilling rig further to the north, subsequent drilling by Rockfire intersected 3m @ 10.04g/t Au, 1m @ 5.09g/t Au, 2m @ 3.17g/t Au and 3m @ 2.94g/t Au. These results proved that careful geological observations and tenacity by our geologists are essential in finding gold deposits.

Following such high results, Pan Australian drilled 11 RC drill holes for a total 405m. This drilling intersected significant results from 5 of the 11 holes, including 2m @ 0.77g/t Au, 4m @ 1.46g/t Au, 6m @ 0.37g/t Au and 2m @ 0.78g/t Au. Importantly, some of the holes do not appear to have been drilled close enough to the outcrop to intersect the main lode and may have been drilled too far away from the mineralisation.

Ramelius Resources drilled two RC holes at Split Rock, with RC chips (which are available in the Rockfire core yard in Charters Towers) showing extreme alteration. Alteration grades downhole from epidote-rich, through iron/magnetite and finally into silica alteration towards the bottom of each hole. The entire alteration package is approximately 60m thick and each hole terminates in strong alteration. The two RC holes hit only low-level gold and copper mineralization.

Dalrymple Resources NL undertook shallow drilling at the Bullseye Prospect in 1991 with very encouraging results for zinc mineralisation. hole BLP002 was anomalous in zinc above 1000ppm for its entire length of 108m, with a higher-grade zone of 6m @ 0.88% Zn only 50m from surface.

Soil sampling shows potential for a strongly mineralised gold (+/- copper) bearing system. There is a main central zone which is orientated east-west, along with a north-eastern zone which is not fully defined. The strong gold and copper anomalism make Cardigan Dam a highly prospective exploration target.