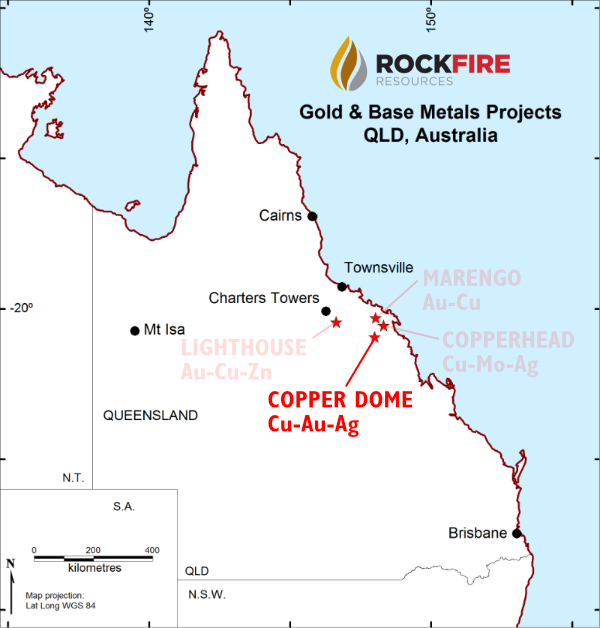 Copper Dome lies approximately 50 km to the southwest of Copperhead and was discovered during regional exploration for porphyry copper deposits along the east coast of Australia during the early 1970’s.

Under its historical name of “Mount Leslie”, Copper Dome is included in the Global Mineral Resource Assessment by the United States Geological Society (USGS), in its “Porphyry Copper Assessment of Eastern Australia” Technical Paper dated 2014.

Only sporadic gold analysis was done, with gold values peaking at 1.86 g/t Au. This indicates the potential for the porphyry system to contain a significant gold component.

Between 1984 and 1985, Renison Limited resampled some of the historical Australian Selection drill core for gold which returned strongly anomalous results including 51m @ 0.2g/t Au, which is very much in line with expectations for large-scale porphyry systems.

The exploration potential at Copper Dome is considered to be very high. Brecciation and faulting is common and copper/gold mineralisation has been recorded within most of the rock units. The intrusions and alteration zones span an area which is ~2km long by ~1km wide, with the dominant alteration assemblage being quartz-sericite-pyrite. The geological model adopted for this project shows a pyrite-rich phyllic shell around the edges of a typical porphyry system.

The phyllic shell hosts an average of 5% (and up to 10%) disemminated pyrite recorded in the historical geological drill logs. Localised zones of high-temperature potassic alteration are documented as chlorite-biotite alteration which is believed to be proximal to an intrusion system. The interface between the potassic and the phyllic zone is typically where the high-grade core of porphyry systems is located.

A number of important characteristics of Copper Dome indicate the potential for the project to grow:

• There has not been any ground/air geophysical surveys
• No soil sampling
• No detailed structural/alteration/geological mapping
• There are substantial zones of visible mineralisation which have not been assayed
• The project holds potential for a missed supergene-enriched copper zone
• Vertical drilling may have missed copper/gold mineralisation hosted within vertical structures
• Rockfire’s modelling is the first evaluation using 3-D computer modelling and data analysis
• The deposit outcrops at surface, providing low-cost, near-surface exploration, resulting in lower exploration costs

Copper Dome is characterised by impressive exploration results from historical drilling, a lack of systematic, modern exploration and porrly-orientated (vertical) drill holes. Copper Dome is considered to be a highly prospective and under-explored prospect.