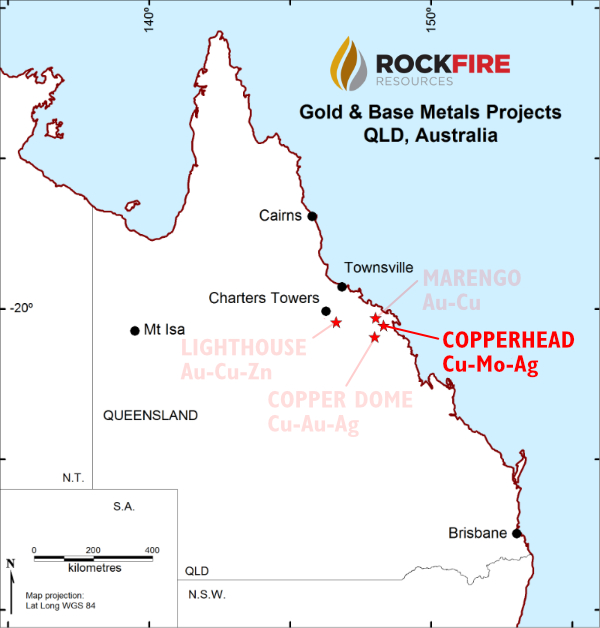 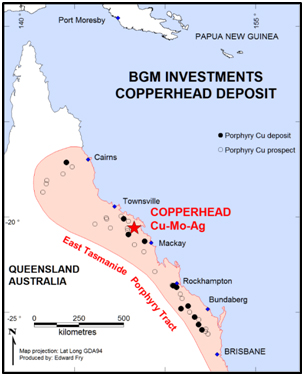 Copperhead is an undeveloped, very large-scale porphyry copper prospect located close to the central Queensland coast and lies within a belt of porphyry copper deposits. In total, ten (10) diamond drill holes have been drilled at Copperhead, with all ten holes encountering chalcopyrite and molybdenum veining throughout the length of each hole. More than 3,000 copper-bearing veins have been recorded in recent drilling undertaken by Rockfire.

Under its historical name of “Julivon Creek”, Copperhead is included in the Global Mineral Resource Assessment by the United States Geological Society (USGS) in its “Porphyry Copper Assessment of Eastern Australia” Technical Paper dated 2014. Copper mineralisation remains open in all directions.

Copperhead was originally identified from stream sediment sampling, which delineated a 6 km x 4 km copper anomaly. Subsequent auger sampling at Copperhead delineated a 3 km x 2 km copper anomaly. This zone contains a 2,800 m x 800 m central anomaly, which has a peak result of 0.22% Cu. Diamond drilling has focused at the western section of the auger anomaly, with only a small fraction of the anomaly tested so far.

Additional drilling is required to delineate the limits of the porphyry system. Results from a helicopter-supported aeromagnetic survey completed in December 2020, suggests that the mineralised zone could potentially be 5 km long and 3 km wide.

Copperhead was initially explored by CRA Exploration in 1963/64 during regional exploration of the Normanby Goldfield, which lies 7 km to the west. This regional work (comprising 1,100 stream drainage samples) identified the Copperhead area by outlining strongly anomalous results over a very large area. Background copper values were 2ppm Cu, whilst the streams draining Copperhead included values of 270ppm, 215ppm, 190ppm, 170ppm and 150ppm copper.

Carpentaria Exploration followed up with further drainage sampling in 1970. Drainage background levels were again found to be low level (10-15ppm Cu) whilst the area immediately draining Copperhead returned strongly anomalous assays of 410ppm, 250ppm, 190ppm and 135ppm copper. Fortuitously, in January 1970, Cyclone Ada caused severe flooding in the region and the heavy rains washed out dense undergrowth from the tributaries of the Andromache River, allowing access for geologists who recorded abundant copper-bearing veins.

Subsequent work showed that Julivon Creek (the stream draining Copperhead) had a large number of mineralised (chalcopyrite, pyrite, molybdenum) shears for at least half its length. It was due to Cyclone Ada that Copperhead was discovered! In 1972, Carpentaria Exploration drilled 5 drill holes and the results from this drilling are unique in that every hole intersected visible copper mineralisation over the length of each hole.

The year 1988 also saw WMC complete more stream drainage sampling north of Copperhead. This sampling proved that streams draining towards the north off the range hosting Copperhead were also anomalous in copper and molybdenum. In this exploration program, streams draining Copperhead returned assays of 45ppm, 50ppm and 60ppm Cu (from a low level background of 10ppm Au) and 3,600ppb, 2,100ppb and 2,000ppb Mo (from a low level background of 200ppb Mo). An anomalous rock sample of 55 g/t Ag was also collected north of Copperhead, close to the headwaters of Wild Creek. Importantly, these north-flowing tributaries indicate that the geochemical anomalism associated with Copperhead is open towards the north.

No work was completed in the immediate area surrounding Copperhead between 1989 and 2017, when Copperhead was granted to Rockfire’s subsidiary, BGM Investments in 2017. 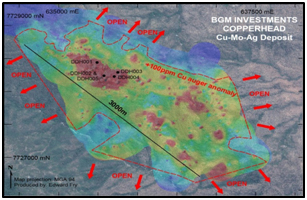 Subsurface mineralisation is confined to, and controlled by fractures and quartz veins. Pervasive hairline fractures are dominant annealed by chalcopyrite and pyrite filling, with numerous fractures/veins thickening to several centimetres. The copper mineralisation appears to be both spatially and genetically (syn/post) related to the pegmatite and aplite phases. Copper bearing veins are noted to overprint the pegmatite and aplite dykes, suggesting that the copper source is chronologically late and yet to be identified. Molybdenum mineralisation is less abundant than either chalcopyrite or pyrite but is essentially identical in its distribution.

In 1972, Carpentaria Exploration drilled 5 diamond drill holes with every hole intersecting copper mineralisation. The core was randomly sampled with a single 1m sample every 30m down hole, without any variation to this pre-determined interval. No geology, visible mineralisation, structure or veining was taken into consideration during this initial sampling episode.

Based on these random results, Carpentaria estimated a mineral resource in 1972 which does not comply with the JORC Australasian Code for Reporting of Exploration Results, Mineral Resources and Ore Reserves (2012 Edition).

Chalcopyrite has a high ratio to pyrite, although diamond drill holes 3 and 4 appear to be slightly more pyritic. In 1989, Costain Australia re-logged and selectively sampled the original drill core and analysed for gold, copper, silver and molybdenum. This work boosted the overall copper grade and determined that there is no gold associated with the porphyry copper/molybdenum/silver mineralising system.