Update of the Plateau Project with further drill results

The Board of Papua Mining (LON: PML), is pleased to update shareholders with further encouraging results from the recent drilling program at its 100%-owned Plateau Prospect in north Queensland, Australia.

“Drilling results from this program have returned wide zones of mineralisation. The gold results including 22m @ 1.9g/t Au are very exciting, as are the broad elevated intervals of other elements. The recent intercepts of 43m @ 2.0g/t Ag and 16m @ 1.1% Zn and 20m @ 0.2% Cu add significantly to historical intercepts of 234m @ 2.5g/t Ag. We believe we are starting to see early signs of a significant project.

Management is very encouraged by this first drilling phase, which has increased the potential for the discovery of a large mineralised system. Plateau is in the vicinity of major gold deposits such as Mt Leyshon, Pajingo, Mt Wright and Ravenswood and we are excited about the similar geological, geochemical and geophysical charateristics we are seeing at Plateau.”

Reverse Circulation drilling undertaken in November and December 2017 has continued to return broad intercepts of gold and silver mineralisation at the Plateau Prospect within the Lighthouse Project, North Queensland. Results from the final 7 holes (BPL005 – BPL011) have been received from ALS Laboratories in Townsville.

As the Company’s’s knowledge of the Plateau Prospect increases through drilling, similarities to the operating Mt Wright Gold Mine (50km NE of Plateau) are being observed, which has historical resources of more than 1.5 million ounces. Importantly, the main lode mineralisation at Mt Wright was not intersected until 160m below surface with mineralisation extending down to 1,200m below surface.

Similarities observed are as follows;

A link is provided below showing the visual similarities between core drilled at Plateau in 2006 and core photographs from Mt Wright. 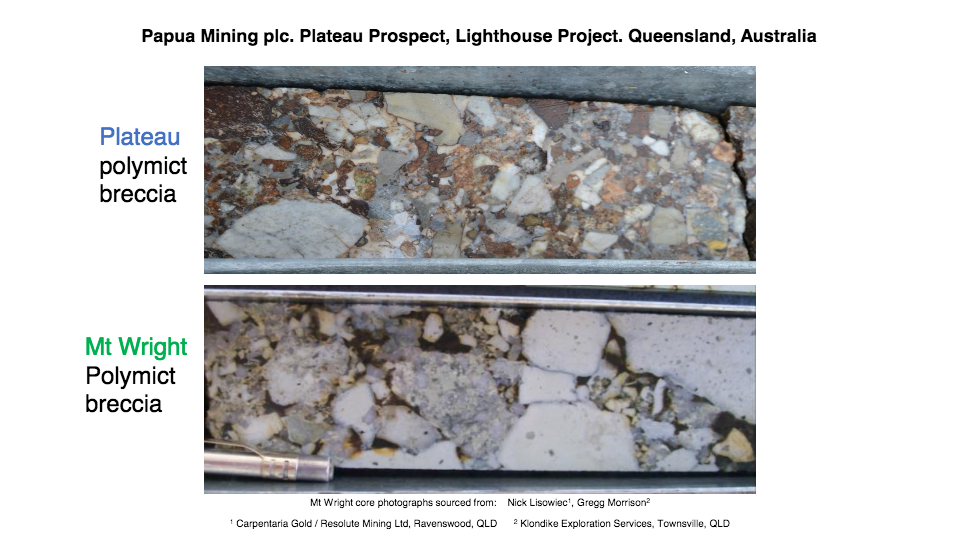 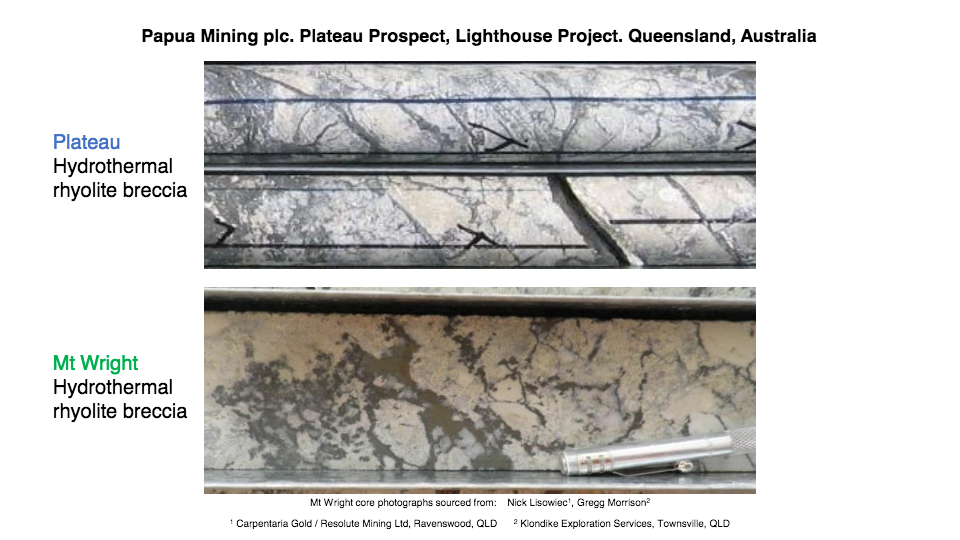 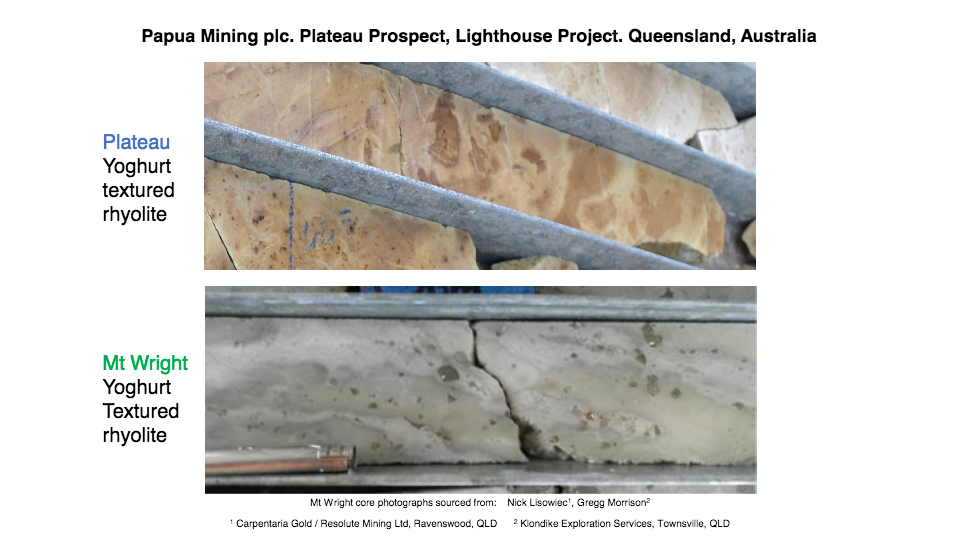 Hole BPL005 was designed to drill through an interpreted fault zone and to definitively test an area where mineralisation was not anticipated. The hole intersected 2m @ 1.0g/t Au, 7.7g/t Ag and 1.0 % Zn from 139m downhole.

Drill hole BPL006 returned 20m @ 0.2% Cu from surface, which is the broadest elevated copper zone intersected to date at Plateau. This broad zone of elevated copper in the eastern-most hole sits on the western edge of a surface copper geochemical anomaly which is continuous between Plateau and Split Rock (2.5km north of Plateau). At Split Rock, which lies inside the Lighthouse tenement, historical surface rock samples collected in 2011 returned up to 11.36% Cu, 3.5 g/t Au, 38.1 g/t Ag and 0.4% Co.

Split Rock is a significant surface copper anomaly (2km x 1.5km), which represents another prospective target for Papua. This prospect will be included in an Induced Polarisation (IP) geophysical survey being planned. This survey will assist in determining if Plateau and Split Rock form part of a much larger mineralised system, which could potentially be connected at depth. 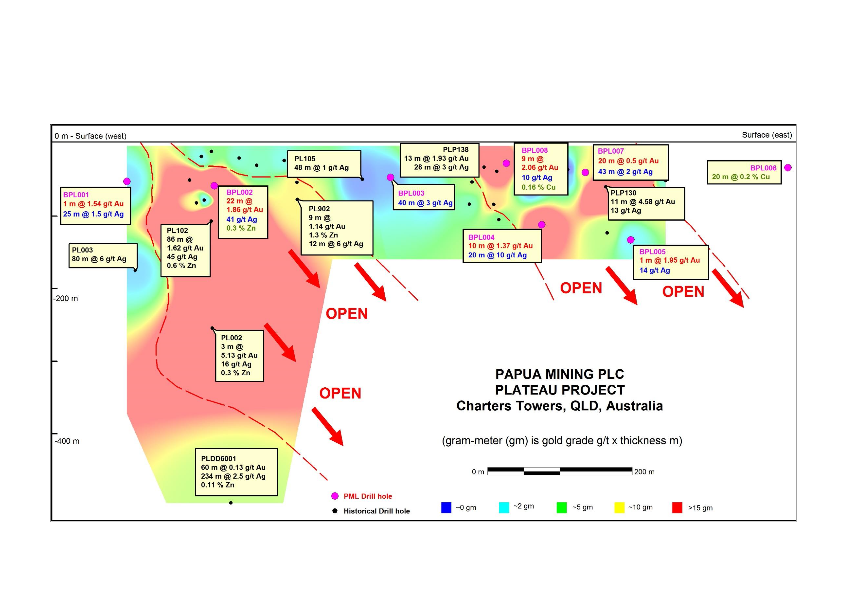 Two holes (BPL009 and BPL010) were designed as pure exploration holes and were drilled south of the main lode of mineralisation (250m and 650m respectively) with the aim of testing the prospectivity of regional structures. Hole BPL009 drill-tested a NE-striking, semi-regional fault which was barren of mineralisation, as was hole BPL010, which tested a remote, circular magnetic feature.

Drilling program details are provided in the table below which includes the rationale for each hole drilled.

Information in this announcement that relates to exploration results is based on information compiled by Mr David Price, a Director of Papua Mining plc, who is a Fellow of the Australasian Institute of Mining and Metallurgy (FAusIMM). Mr Price has sufficient experience relevant to the style of mineralisation and type of deposit under consideration and to the activity which has been undertaken to qualify as a Competent Person as defined by the 2012 Edition of the Australasian Code for Reporting of Exploration Results, Mineral Resources and Ore Reserves (the JORC Code) and under the AIM Rules – Note for Mining and Oil & Gas Companies. Mr Price consents to the inclusion in the announcement of the matters based on their information in the form and context in which it appears.

For further information on the Company please visit www.rockfireresources.com or contact the following:

This information is provided by RNS

The company news service from the London Stock Exchange